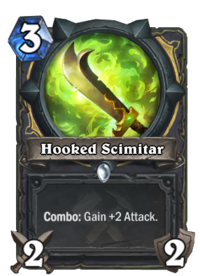 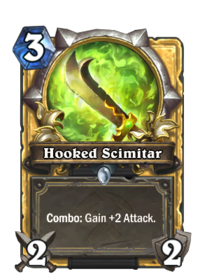 Oooooooooooow. I'm hooked on a scimitar!

Hooked Scimitar is a common rogue weapon card, from the Saviors of Uldum set.

A cheaper alternative to Waggle Pick that features the same aggressive statline, but lacks the Deathrattle. Hooked Scimitar is useful for decks that don't want to use Waggle Pick's potentially detrimental effect. While Hooked Scimitar requires a Combo to set up, Rogue has plenty of ways to do so.

With The Coin, Hooked Scimitar can be played as early as turn 2. This is excellent for discouraging your opponent from playing minions, setting up for Hench-Clan Thug, or just applying fast pressure. Using both swings after this opening allows you to curve into Waggle Pick, dealing 16 damage with weapons alone by turn 5.

It's usually a bad idea to play Hooked Scimitar on tempo without activating its Combo. Not only is this a massive waste of value, Rogue has multiple better cards to play on 3 mana that should be prioritized.