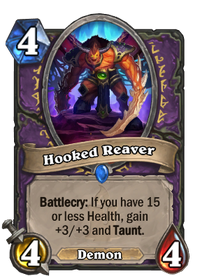 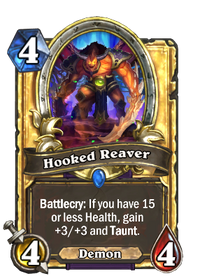 The hook is just an accessory. He can reave just fine without it.

Hooked Reaver is a rare warlock minion card, from the Kobolds and Catacombs set.

Hooked Reaver can be obtained through Kobolds & Catacombs card packs, or through crafting.

Without its Battlecry, this is a below average minion, but gets well over its cost in value when it does activate, turning into a 7/7 with Taunt. Its effect is very hard to activate on curve, and will often require self-damage to reach its threshold quickly. This incentivizes running self-damaging cards like Vulgar Homunculus and Spirit Bomb to support it.

Note that the Battlecry will always activate if you are transformed into Lord Jaraxxus.

As a downside, it won't have its good stats when it's revived or brought into the battlefield without activating its Battlecry, such as Possessed Lackey and Skull of the Man'ari.

The doomguard, or doom guard, (sometimes pluralized as doomguards) are a type of demonic warrior of the ered'ruin species that used to work as Archimonde's personal escort, and serve the Burning Legion with great fervor.