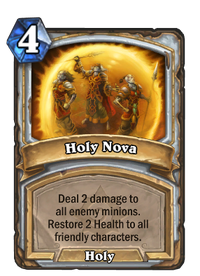 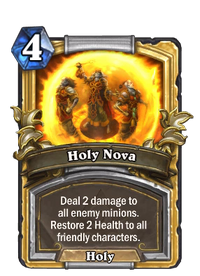 Deal 2 damage to all enemy minions. Restore 2 Health to all friendly characters.

If the Holy Light forsakes you, good luck casting this spell. Also, you're probably a jerk.

Holy Nova is a priest spell card, from the Basic set. It generates a combined AoE healing and damage effect, affecting all characters.

Two copies of Holy Nova are a reward for raising a priest to level 6.

Two Golden copies of Holy Nova are a reward for raising a priest to levels 45 and 46.

Holy Nova is uncraftable and cannot be crafted or disenchanted.

Example: an Imp Gang Boss hit by Holy Nova will generate an Imp and could cause a Knife Juggler to deal 1 damage to a Northshire Cleric, which is then healed by the same Holy Nova, causing it to draw a card.[1] Moreover, the healing part of Holy Nova can heal mortally wounded minions and heroes, preventing them from dying.[2][3]

Holy Nova is an efficient board clear comparable to Consecration and, coupled with its Health regeneration, is the cornerstone of many popular priest sustain decks.

In Wild, Holy Nova can be extremely effective for card draw when combined with Northshire Cleric and several damaged friendly minions.

Holy Nova is a priest spell from World of Warcraft. It is an instant AoE healing and damage spell with a 10-yard range, healing the 5 lowest-health allies and dealing damage to all enemies within range. Holy Nova is mostly used for dealing instant AoE damage, such as when dealing with a hunter's Snake Trap, or when attempting to flush a rogue out of stealth, and unlike its Hearthstone incarnation, is generally ineffectual for achieving substantial healing or damage. Due largely to its disuse, with Mists of Pandaria Holy Nova was made into a glyph, removing it from priests' basic ability roster.