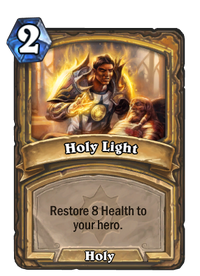 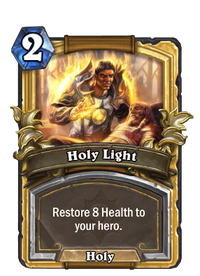 If you are often bathed in Holy Light, you should consider wearing sunscreen.

Holy Light is a paladin spell card, from the Basic set.

Two copies of Holy Light are automatically included in all players' collections upon unlocking the paladin class.

Two Golden copies of Holy Light are a reward for raising a paladin to levels 15 and 20.

Holy Light is uncraftable and cannot be crafted or disenchanted.

Holy Light will be a part of the upcoming Core set with the following appearance:

Holy Light is a basic but useful card without much strategy involved; either heal yourself or a minion for a large amount at a small mana cost.

Holy Light is one of the main healing abilities of Holy paladins in World of Warcraft. It is an efficient, but slow heal best used at times of low threat, or in synergy with other abilities.

The "Holy Light" is also the name of the powerful force from which paladins and priests draw their Holy powers.

The Light, referred to as the Holy Light by some cultures, is a non-theistic religious form of philosophy with adherents among the Alliance and some members of the Horde. The organization closest related to the Light is the Church of the Holy Light.