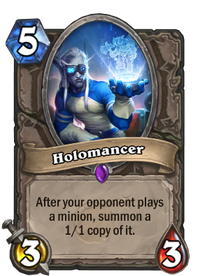 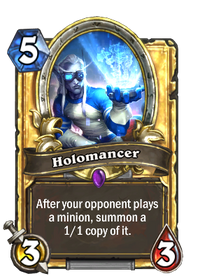 After your opponent plays a minion, summon a 1/1_copy of it.

Help me, worthy opponent. You're my only hope.

Holomancer is a epic neutral minion card, from The Boomsday Project set.

Holomancer can be obtained through The Boomsday Project card packs, or through crafting.

Holomancer is a card which discourages your opponent from playing minions with powerful effects, such as Weaponized Pinata or Prophet Velen. However, both Holomancer and the card copies summoned have pitiful stats, which means that it's important to protect it using Taunt, Stealth or similar abilities.

Summon
Anything you can do, I can do better.
Effect triggering
Great idea.
Attack
Obviously.