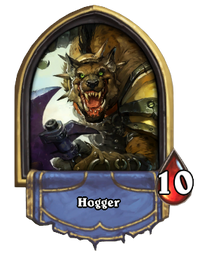 For other representations of Hogger, see Hogger (disambiguation).

Hogger is the first enemy boss encountered during the game's introductory tutorial.

It is impossible to lose to Hogger, both due to his low Health and the fact that players are forced to follow the careful directions. This first battle is intended to teach players the basics of playing minions and spells, attacking, and taking damage. 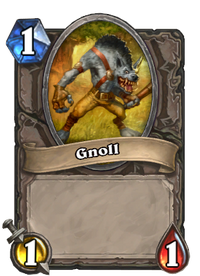 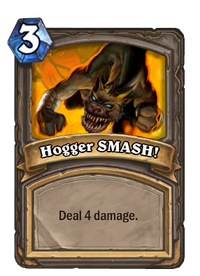 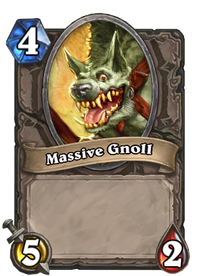 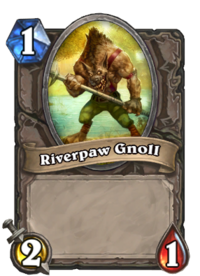 Player actions during this mission are restricted, resulting in a fixed order of events.

The player always starts with the same card in their hand, and will draw new cards each turn in the same order. The game ends before the player can exhaust their deck.

As the first mission in the tutorial, this boss imposes all the restrictions described on that page and is by far the most tightly controlled encounter faced. Every turn has just one card to play, and there are only two points where players can make a meaningful decision (in both cases, whether to attack a minion or Hogger). They will win no matter what.

The interface is augmented while facing Hogger:

There are four distinct lines of play possible. Playing more aggressively will cause Hogger to die before all the described actions are taken, but the dialogue is the same regardless of the exact order of events.

After "clicking to start", a card pack is in the center of the battlefield with a note: "Free cards!" When clicked it cracks and explodes open; Jaina's portrait flies out along with a storm of cards, and:

Upon clicking "Start" on the note:

The Innkeeper: Let the battle begin!
Hogger: AAaarooh!!
Hogger plays a Riverpaw Gnoll.
Jaina: Bring it on!
Hogger: hehehehoohoohoo!
Jaina draws a Murloc Raider.
Jaina: I need some minions to fight for me.

A red arrow points to the Raider. When it is selected, Jaina's side of the board is highlighted green. Upon playing it:

Jaina: Well, at least he didn't play a card this turn...
A note explains, "If you run out of health, you lose."
Hogger: Ha Haaa!
Jaina draws a Bloodfen Raptor.
Jaina: Ha! Another minion, just what I needed.

Upon playing the Raptor:

Jaina: I've got you right where I want you.
A note says "Minions must wait a turn to attack.". If the Raider has not yet attacked, a note will point out "This one was played last turn." and then "Attack with your minion!"

Upon selecting the Murloc Raider, a note encourages "Crush this gnoll!" and then "Click him!", pointing to the minion. Attempting to attack Hogger does not register. If the turn is over after trading the minions:

Hogger: hehehehahaha!
Jaina: Two cards? He must have been saving one.
Jaina draws a River Crocolisk.
Jaina: Hmm... should I attack a Gnoll, or Hogger himself?

Optionally, upon attacking and killing a Gnoll with the Bloodfen Raptor:

Jaina: Ha! That's not enough damage to kill my minion.

Upon attacking Hogger for the first time, a note appears - "When Hogger has no health, you win." - and:

After ending turn, Hogger kills the Raptor with his minion(s), then plays a Massive Gnoll:

Jaina: 5 Attack? That thing is huge!
Jaina draws another Bloodfen Raptor.
Jaina: I can kill this Massive Gnoll, or go for his master.

Jaina's River Crocolisk can trade for the Massive Gnoll. If it doesn't, the Gnoll will trade with the Bloodfen Raptor on Hogger's turn. In either case, upon the gnoll's death:

Jaina: I'm coming for you next, Hogger!

After playing the Raptor and ending turn, the Massive Gnoll trades if it's still alive. Then, Hogger plays Hogger SMASH! on Jaina:

Hogger: ha ha ha! Rawrr.
Jaina draws a Fireball.
Jaina: A SPELL card! It can only be used once, so I better make it count...
After Jaina attacks and casts Fireball, Hogger plays a Gnoll. Jaina draws another Fireball. Attempting to cast it on the Gnoll prompts the message, "Ignore the puny gnoll and finish off Hogger." The minion may be killed with Jaina's own Raptor before finishing off Hogger.

Hogger: AAaarooh!!
The tutorial progress plaque is displayed, featuring a sketch of a minion portrait with Attack and Health labelled. Hogger's token is smashed by a red X and turns grey.
Jaina: Back to the Stockades with you, Hogger.