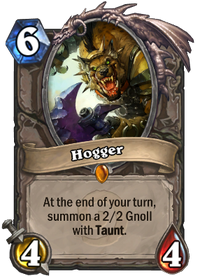 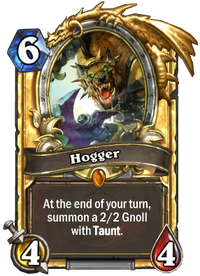 At the end of your turn, summon a 2/2 Gnoll with Taunt.

Hogger is super powerful. If you kill him, it's because he let you.

For other representations of Hogger, see Hogger (disambiguation).

Hogger is a legendary neutral minion card, from the Classic set.

Hogger can be obtained through Classic card packs, through crafting, or as an Arena reward. Regular Hogger can also be obtained as a first-time reward for first time reaching Legend in Ranked mode. 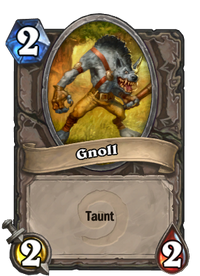 If not dealt with, Hogger can become a supreme annoyance for the opponent when played. Summoning the 2/2 Taunt means that you block at least one attack each turn, giving you immense board control. Hogger's dominating board presence makes it a soft taunt for your opponent.

Despite his comparatively poor raw stat for cost economy, Hogger is always good value, since even if the opponent removes or Silences him immediately, you will still get at least 1 Gnoll from him, justifying his cost. The only exception is if he dies before the end of the turn you play him (for example if you play him into a Snipe).

Hogger is very effective in the later stages of the game to block the attacks of your opponent's last minions, when they have few to none spells left to deal with Hogger. This is what makes Hogger most powerful against Deathwing, as your opponent will discard all their current cards after they play Deathwing from their hand, and will likely have no other ways to remove the Gnolls than by simply attacking them with this massive minion.

Hogger is without doubt the most infamous gnoll on Azeroth.

Hogger is a level 11 elite named Riverpaw gnoll chieftain in Southern Elwynn Forest. His defeat is the objective of a quest for low-level Alliance players.

While Hogger's significance in-game was originally minimal, his relative difficulty at such a low level has caused him to become one of the most well-known and popular minor characters in the game. His role in-game was subsequently expanded with Wrath of the Lich King and Cataclysm, and a gnoll battle pet named Hogs is planned as reward for the game's 10th anniversary.

The Hogger card back has the following flavor text: "The Terror of Elwynn, the King of Gnolls. They say he bathes in the tears of young heroes, hence the wet dog smell."

This is the original, uncorrupted version of Hogger, Doom of Elwynn.

The Battlegrounds-exclusive minion Cap'n Hoggarr is a pirate variant of Hogger.