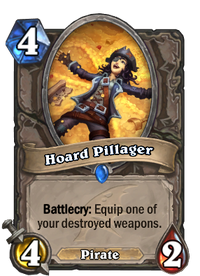 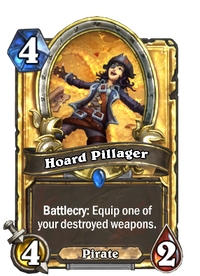 Battlecry: Equip one of your destroyed weapons.

Better to have stabbed and lost. And then found again!

Hoard Pillager is a rare neutral minion card, from the Descent of Dragons set.

This minion has rather poor stats, but its Battlecry allows you to reuse an old weapon while avoiding paying extra mana to equip it, giving aggressive Warrior decks more chances to push out damage. To get the most out of this card, it's best to run weapons with high stats or has effects that activate on attack, Deathrattles, or Spellbursts. Ancharrr is an obvious choice weapon, as are other weapons like Livewire Lance, Wrenchcalibur, and Arcanite Reaper.

Other classes can use Hoard Pillager to reequip key weapons of their own. Shamans can use it for extra use of The Fist of Ra-den or The Runespear. Druids can get an extra Twig of the World Tree to refresh their mana. Paladins can swing with extra Truesilver Champions or the Ashbringer. Demon Hunters can reuse powerful, active effect weapons, or just high attack weapons like Marrowslicer or Flamereaper. Every class can use it for another Atiesh or another Sphere of Sapience.

Hoard Pillager should not be used in Rogue, due to the large chance of re-equipping a Wicked Knife.

Summon
Treasure, loot – what more can I ask for?
Attack
I stole it first! 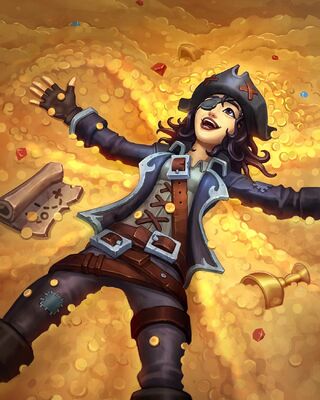