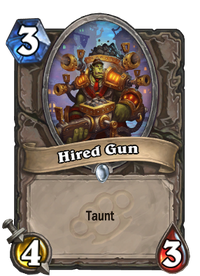 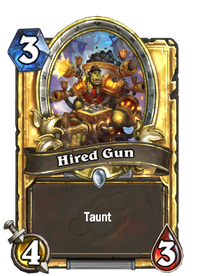 He loves his job and would do it for free! (But don't tell his boss!)

Hired Gun is a common neutral minion card, from the Mean Streets of Gadgetzan set.

Hired Gun can be obtained through Mean Streets of Gadgetzan card packs, or through crafting.

A Taunt with decent stats for its cost. Has +1 Attack more than Ironfur Grizzly, in exchange for the Beast tag.

Summon
Talk about a nice suit!

The Hired Gun's weapon is called a "Rock Spitter", and literally fires lumps of rock, carried in a massive reservoir on the mercenary's back.[1]