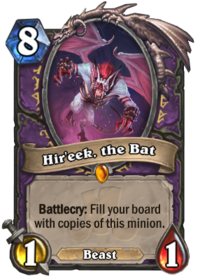 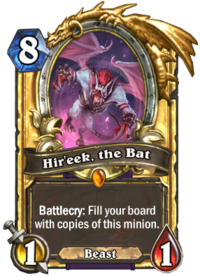 Battlecry: Fill your board with copies of this minion.

Hir'eek, the Bat is a legendary warlock minion card, from the Rastakhan's Rumble set.

Hir'eek, the Bat can be obtained through Rastakhan's Rumble card packs, or through crafting.

On his own, Hir'eek can provide up to seven 1/1 minions for the cost of 8, which is often not particularly valuable for its cost and creates a board state highly vulnerable to area of effect attacks (comparable with Onyxia, who is 1 mana more expensive but has 8/8 in stats in addition to swarming the board with 1/1 minions). As a result, Hir'eek is best used in conjunction with cards that buff his stats while he's in the player's hand, such as Soul Infusion and Spirit of the Bat.

One of the biggest worries as a Warlock card is to discard Hi'reek. Because of this Soulwarden is essential in any deck that runs any of the classic high value discard cards. If you can get Hi'reek to 3/3 he already becomes worth playing, but due to the strength of hand buffs its completely possible to get him up to 5/5 or higher.

Summon
I feast upon your flesh!
Attack
Bring me more!

Hir'eek (pronounced high-REEK), the Lord of the Midnight Sky, is a bat loa. He is represented on Azeroth through a champion of his choosing, a position once held by the deceased High Priestess Jeklik.

Like the other loa of the Gurubashi tribe, Hir'eek was held in Zul'Gurub against his will during the time when the Hakkari were attempting to resurrect Hakkar the Soulflayer.

Adventurers were later guided by the spirit of Hir'eek in Backdoor Dealings, where he turns the player into a shadowy gargoyle.

Shortly after the events of Landfall, Hir'eek communicated with Vol'jin, betrayed by Garrosh Hellscream, through visions.

Hir'eek would eventually be corrupted by G'huun and the blood trolls, and subsequently slain by an adventurer with the aid of Jo'chunga and his poison. His death was mourned by the Zandalari.

Hir'eek's corpse could later be seen by Alliance adventurers looking to escape the blood trolls.

In Hearthstone lore, Hir'eek serves as the patron loa of Hir'eek's Bats, the warlock team in Rastakhan's Rumble. This association between Hir'eek and the warlock class is unique to Hearthstone.