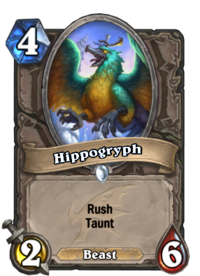 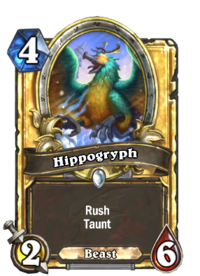 Known for its ferocious grace, the hippogryph is a truly majestic creature. Except when molting.

Hippogryph is a common neutral minion card, from the Descent of Dragons set.

Hippogryph can be obtained through Descent of Dragons card packs, through crafting, or as an Arena reward.

A reasonable midrange Rush minion. It is directly superior to Stegodon, being a Taunt with the same body while also destroying a minion with 2 health the turn it's played. It is also similar to Swift Messenger but without the useful stat-swapping ability.

Hippogryphs are ancient, magical beasts whose bodies resemble both stags and ravens. They patrol the skies above Kalimdor and viciously attack any enemies of the wilds that they encounter. Most hippogryphs are found in Kalimdor. While a few of them can be found in Ashenvale, the majority of hippogryphs inhabit the south-western Feralas and Azshara. Recently it was also discovered that several hippogryphs live in the northern Howling Fjords.

The intelligent hippogryphs have given their allegiance to the night elves in honor of Cenarius, who stands as the protector of nature and all its creatures. Some say they were created by Cenarius himself as a gift for the night elves. The hippogryphs are wary of other races, but they're intelligent enough to recognize a friend of a friend. In the heat of battle, Night Elf Archers can call upon the mighty Hippogryphs to carry them into the air. The Archers mount the flying beasts and are capable of firing their arrows from the hippogryphs' backs. The brave creatures respond to the female riders as if they shared an empathic bond. Perfectly capable of understanding sentences, they also respond to code sounds. There is also an established code system of tapping the hippogryph's neck, as it is far easier to communicate through touch in driving winds. They appear to take pride in successfully navigating difficult conditions, and having the rider commend or acknowledge them for it. Indeed, their intelligence means that they stand a chance in flying such dangerous weather that no mere bird could withstand. 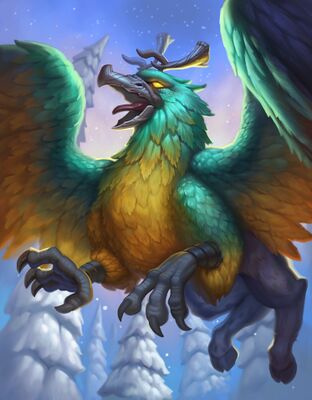