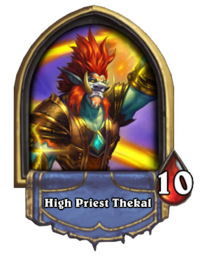 For the minion card of the same name, see High Priest Thekal

High Priest Thekal is a boss that can be encountered during the Rumble Run, if the player has not choosen one of the Paladin Shrines. 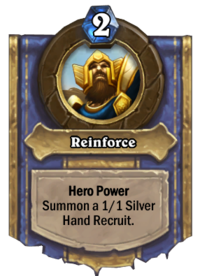 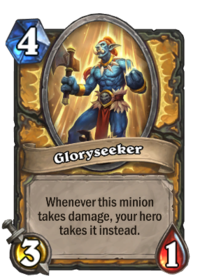 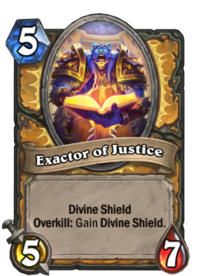 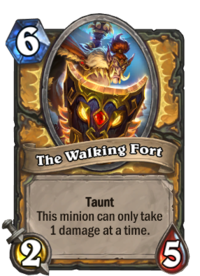 High Priest Thekal
A decisive strike!
First ya shrine crumble. Next, you.
K.O.!
Your "beast within" is no more dan a cub. (vs. Druid)
Your shrines fall just like your empire. (vs. Hunter)
What's a flame without fuel? (vs. Mage)
Even de spirits be feelin' dat blow! (vs. Priest)
Pirates be known for their hook. Mine's betta. (vs. Rogue)
Ya gonna croak, frog-man! (vs. Shaman)
Getcher wings outta my ring! (vs. Warlock)
I be shreddin' metal. (vs. Warrior)

Oh, she got de golden glow!
Shine bright, Shirvallah!
Together we are strong!

Can't touch this.
Try me.

Spirit of the Tiger

High Priest Thekal
It wasn't a fair fight, mon. You had ta fight me.

High Priest Thekal was the High Priest of the Primal God Shirvallah, the god tiger. In order to quell Hakkar the Soulflayer, the trolls of the land banded together and sent a contingent of High Priests into the ancient city of Zul'Gurub. Each priest was a powerful champion of the Primal Gods, but despite their best efforts they fell under the sway of Hakkar. Now the champions and their Primal God aspects feed the awesome power of the Soulflayer. Any adventurers brave enough to venture into the foreboding ruins must overcome the High Priests if they are to have any hope of confronting the mighty blood god.

This master fighter is a fan favorite! Wielding the Light as a weapon, he can use his healing energy in ways Paladins haven't seen before. Confident to a fault, Thekal moves almost as quickly as he talks, dancing around his opponents for the crowd.[2]

Shirvallah's Vengeance - Auto-win with Hir'eek's Hunger if you play a damage card (Flame Imp, Kobold Librarian, etc.) on turn one.