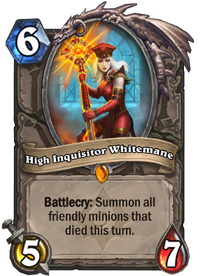 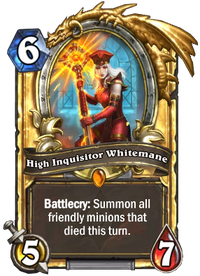 Battlecry: Summon all friendly minions that died this turn.

No one told her that champions want to sleep in.

High Inquisitor Whitemane is a legendary neutral minion card, from the Classic set.

High Inquisitor Whitemane can be obtained through Classic card packs, through crafting, or as an Arena reward.

Regular High Inquisitor Whitemane (Core) is obtained for raising sum of all your class levels to 60.

Golden High Inquisitor Whitemane (Core) is obtained for winning 5000 games across all classes.

High Inquisitor Whitemane (Core) is uncraftable and cannot be crafted or disenchanted.

High Inquisitor Whitemane has the potential for large amounts of value with her powerful battlecry. Her main purpose is for you to trade in your board into the enemy minions, hopefully clearing it, and then resummoning it for a massive board-swing.

While at first glance she might seem only useful in big-decks where she can resurrect large 7-mana + drops for maximum value, she can theoretically work in a more mid-range strategy or even aggro strategy. For example, if the opponent plays a big taunt minion, or a minion with a powerful passive effect that you have to trade into, High Inquisitor Whitemane can allow you to do that without losing any pressure, at the cost of making the deck somewhat more inconsistent due to having such a high-cost minion.

It might be tempting to hold off on High Inquisitor Whitemane as long as possible to get the maximum effect out of her battlecry, it's important to note that she already has decent stats for her mana-cost. If you resummon a single 3-mana 3/4, then you're effectively played a 7-mana 9/12 that dealt 3 damage to an enemy minion, which is still very good.

The biggest weakness of High Inquisitor Whitemane is that she is very reliant on an already existent board, as she is sub-par if played by herself. If you are so behind that you can not establish a board, or if your minions die on your opponents turn, making use of her can be impossible. Therefore, she is sort of a win-more card, a card that can help ensure victory but not turn around a losing situation, and it can make her inconsistent in general

Summon
Arise, my champions!
Attack
For the Scarlet Crusade!

Sally Whitemane was a priestess of the Light and the High Inquisitor of the Scarlet Crusade. She directed their activities from within the Scarlet Monastery's Cathedral, until her death at the hands of adventurers and Lilian Voss. During the third invasion of the Burning Legion, Whitemane was resurrected as one of the Four Horsemen of the Ebon Blade.

This is the living version of Inquisitor Whitemane.