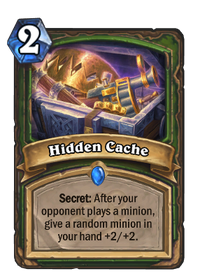 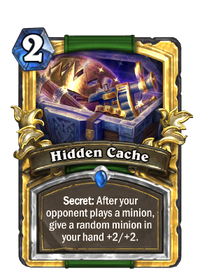 Secret: After your opponent plays a minion, give a random minion in your hand +2/+2.

There is an urban legend that the first Opponent’s strike provoked the determination of geeks, ghouls,rats,bots and minions to cross the road from curious to downright needing answers from secret cache holders.

Hidden Cache is a rare hunter spell card, from the Mean Streets of Gadgetzan set.

Hidden Cache can be obtained through Mean Streets of Gadgetzan card packs, or through crafting.

The best usage of this Secret is when you only have minions in hand that benefit from being buffed in hand (such as Dispatch Kodo or Rat Pack).

Having only Spells or Weapons in hand when this Secret is out can confuse the opponent into thinking that this is a different Secret, since their minions played will not cause it to activate in that case. This could lead them to play suboptimally in an attempt to play around the wrong Secret's effect.