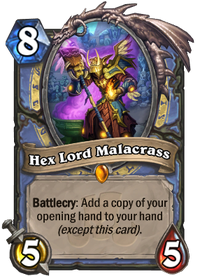 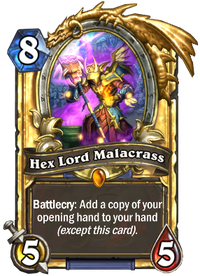 Battlecry: Add a copy of your opening hand to your hand (except this card).

For the boss of the same name, see Hex Lord Malacrass (boss).

Hex Lord Malacrass can be obtained through Rastakhan's Rumble card packs, or through crafting.

Hex Lord Malacrass is a very value-oriented card for control decks with peculiar applications. While normally in the mulligan phase you generally opt for cheap cards you can play early on, doing so will weaken the value Malacrass provides. Maximizing his effect will require a balance between low-cost cards to play at the start of the match and mid to high-cost cards that you want another copy of late game.

Malacrass has a consequence of duplicating Quest cards, which means you could possibly complete Open the Waygate twice for two Time Warps, a difficult but not impossible task, or another Raid the Sky Temple if you decide to switch back to it later in the game.