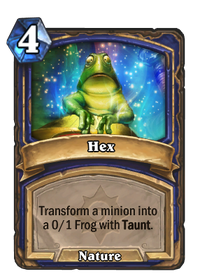 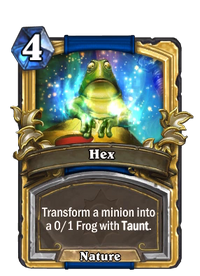 Transform a minion into a 0/1 Frog with Taunt.

Hex is a shaman spell card, from the Basic set. It permanently transforms a minion into a 0/1 Frog with Taunt, removing all enchantments and card text.

Two copies of Hex are automatically included in all players' collections upon unlocking the shaman class.

Two Golden copies of Hex are a reward for raising a shaman to levels 47 and 48.

Hex is uncraftable and cannot be crafted or disenchanted. 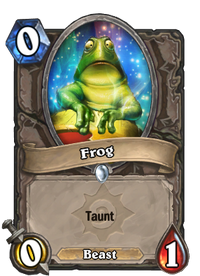 One of the Shaman's most powerful removal spells, this is a great card for easily and efficiently removing large and powerful minions from the field. It can be tempting to use early in the game due to the relatively low Mana cost, but is often better saved for later. It is best used on very large minions such as Deathwing, or minions with powerful abilities, like Gadgetzan Auctioneer. This spell permanently transforms the minion into a 0/1 Frog with Taunt, removing all enchantments and card text. This process does not trigger Deathrattles, cannot be prevented by Divine Shield, and cannot be reversed. It also prevents them from being re-summoned via effects like Resurrect and N'Zoth's Battlecry.

The main downside to this spell is that the target is not destroyed, but replaced with a 0/1 Taunt. While this generally means it cannot attack, ongoing effects and buffs granted to it following its transformation (such as Raid Leader) can still grant it Attack, turning into an attack-capable minion. More critically, the Frog's Taunt will often require the shaman to waste an attack in order to destroy the target, albeit usually without requiring a minion to take any damage in the process. This can be seen as an additional price to playing this card. In a few situations, the Frog's Taunt can actually be more problematic than the minion that was Hexed. Consider this carefully, and if there are other targets to be attacked that round, attack them first before using Hex.

Be aware that the Frog is a Beast. This can make Hex a little riskier against Hunters and, to a lesser extend, Druids, whose synergy with beast cards can allow them to quickly turn the Frog into a respectable minion, or even benefit from its death with Scavenging Hyena.

In some cases, Hex can be used on your own minion to create an extra Taunt. While this is an extreme play, it may allow you to survive an extra turn.

The decks that utilize Hex the most are decks that need assistance in getting rid of troublesome minions. The Shaman is a class which does not have access to as many destroy effects as some other classes. Including Hex in a deck which otherwise only has Lightning Storm and/or Lightning Bolt is a good idea, especially if you do not want the downside of Overload to affect you too badly.

In Wild format, Hex is a hard counter to the mage Secrets Duplicate and Effigy, because using Hex on a minion and then killing the Frog would result in the Frog being duplicated in the case of Duplicate, and a 0-mana minion being summoned in the case of Effigy.

The Hex spell in World of Warcraft is very similar to its appearance in Hearthstone. It is a crowd control spell that transforms the target into a frog, preventing it from doing anything other than moving.