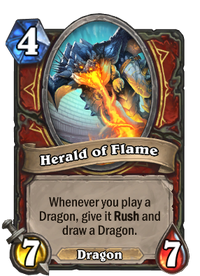 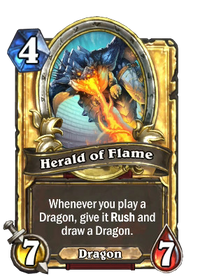 Herald of Flame is a Tier 4 minion in the Battlegrounds game mode.

Herald of Flame's Overkill effect can proc off itself, which means a string of low-health minions can wipe out multiple minions in one hit. This makes it effective against token builds, which only the strongest of token minions can survive. While its effect would be most optimal to attack as late as possible, it still needs to survive long enough to attack, so proper ordering is important. Even against non-token minions, it still outputs a bit of damage and pops Divine Shields, which helps with finishing off a damaged high-priority cleave minion or disabling a Deflect-o-Bot's shields.