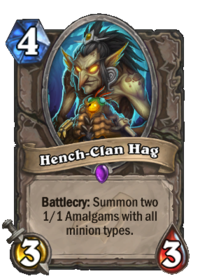 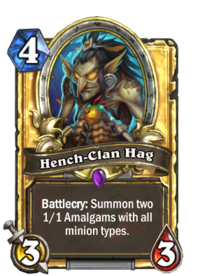 The Hench Clan is an equal opportunity employer, no matter which parts of you came from where.

Hench-Clan Hag is an epic neutral minion card, from the Rise of Shadows set. 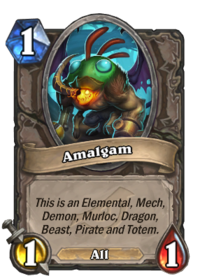 At its baseline, Hench-Clan Hag is a 4 mana 5/5 split between 3 bodies. The Hag itself has reasonable stats and can trade into plenty of 3 mana minions. However, its quite weak to small AOE removal like Dragonmaw Scorcher and Whirlwind.

The card is most useful when you have cards that can synergize well with the Amalgams summoned, such as Houndmaster, Murloc Warleader or any Mech with Magnetic.

Summon
You can be whatever you want!
Attack
My precious!