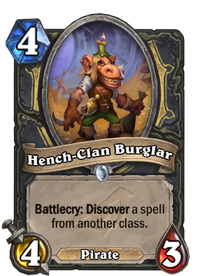 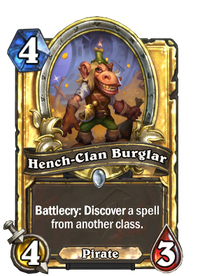 Battlecry: Discover a spell from another class.

She's more of a rat burglar.

For the boss card in Book of Heroes, see Hench-Clan Burglar (boss).

Hench-Clan Burglar is a common rogue minion card, from the Rise of Shadows set.

Hench-Clan Burglar can be obtained through Rise of Shadows card packs, through crafting, or as an Arena reward.

A solid tempo card that can provide value and even pull unexpected answers. Hench-Clan Burglar has okay stats along with its powerful effect, making it an ideal play on turn 4. It obviously also works very well with cards like Tess Greymane, Vendetta, and Spectral Cutlass, ensuring you'll get a class card even against another Rogue. It's also a Pirate, which means it can be pulled by Raiding Party or Captain Hooktusk.

This card directly competes with Blink Fox, which loses the Discover and 1 Attack, but is 1 mana cheaper.

Summon
I take this! Oh, and that!
Attack
Eyah! Gimme!