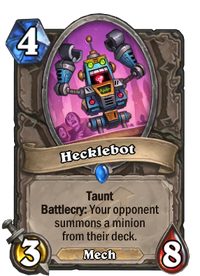 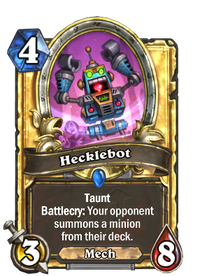 Taunt
Battlecry: Your opponent summons a minion from their deck.

Built by goblins, designed by a troll.

Hecklebot is a rare neutral minion card, from the Rise of Shadows set.

Like Dirty Rat, Hecklebot can be used as a tech card against combo decks by potentially pulling out key minions from the opponent's deck prematurely, depriving it of its Battlecry effect or giving you a chance to destroy it before the opponent could make full use of them. Its effect is just as risky as Dirty Rat, so playing it early is generally a bad idea, even with its high stats.

Attack
You blithering bumpkin!
You disreputable dunce!
You gigantic goose!
You jabbering junkie!
You noxious ninny!
You pathetic pipsqueak!
You silly sloth!
You ungrateful underling!
You wretched wretch!