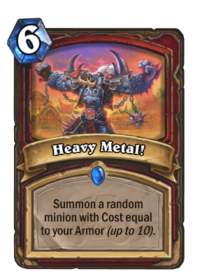 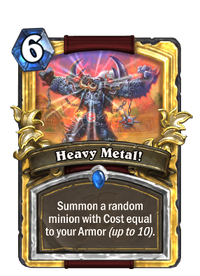 Summon a random minion with Cost equal to your Armor (up to 10).

This metal is so heavy it will satisfy your iron requirements for the next year.

Heavy Metal! is a rare warrior spell card, from the Rastakhan's Rumble set.

Heavy Metal! can be obtained through Rastakhan's Rumble card packs, or through crafting.

Heavy Metal's effect is functionally similar to Geosculptor Yip, the difference being that the minion is summoned immediately, rather than at the end of your turn. This card is best in Control Warrior or Fatigue Warrior decks, where you are likely to have a lot of armor for a long time and thus have the highest probability of making a 10-cost minion at the cost of 6 mana. However, unlike Geosculter Yip, whose high health means she will likely stick around long enough to continually produce strong minions, this card is a single chance of whether or not you get a strong minion, potentially wasting 6 mana. Since the card is 6 mana, it cannot fit into a Baku the Mooneater deck, and unless one is exceptionally lucky to get a lot of armor by Turn 6, this card will not make up it's cost.

A potentially strong combo is using Bring It On! to immediately bring your armor up to 10 the turn before you use Heavy Metal.