The beta was available to players in North America, Australia/New Zealand, Latin America, Southeast Asia, Europe, Korea and Taiwan, with a separate beta test planned for China. The game's beta was available only on Windows and OS X operating systems. 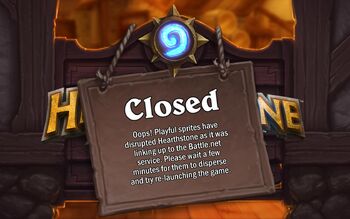 Hearthstone's closed beta test began in the Americas region on 16th August 2013, and in the Europe region on September 4th 2013. As of November 8th 2013, over 1 million players had been invited to the closed beta[1]. The closed beta ended with the beginning of the open beta phase in January 2014.

Blizzard announced at the start of the beta that there would be a wipe partway through this phase. On September 26th, they announced that the wipe would be taking place during maintenance on October 2nd in preparation for Patch 1.0.0.3890, resetting all Hearthstone account information and card collections, and later stated that there would be no further wipes.[2]

Hearthstone's open beta test began in the Americas region on 21st January 2014, and in the Europe region on 22nd January 2014. By 23rd January 2014 the game was also live in the Taiwan/Korea and China regions, making the game available for all players worldwide.

The open beta ended with the full release of Hearthstone on March 11th 2014.

Following is a full list of all patches during the game's beta phase. The final beta patch, Patch 1.0.0.4944 was followed within a few hours by the full release of Hearthstone.