The moniker "Hearthstone Global Finals" is no longer used, and the term "Hearthstone World Championship" is reused.

The 2019 Hearthstone Global Finals was the sixth year of the Hearthstone World Championship. This Championship took place during BlizzCon in the fall of 2019. For this tournament, the Shield-Phase Conquest match format was used.

For more information about the complete redesign of the Hearthstone Esports scene in 2019, please check out the official blog post.

The old logo before Mammoth year and name change.

The 2016 Hearthstone World Championship saw 16 exceptional players, four apiece from Europe, China, Asia-Pacific, and the Americas, come together to duel for their share of a $1,000,000 prize pool and the title of Hearthstone World Champion. Four groups of four players (one from each region) competed against each other in a double-elimination tournament format until only eight players remained, at which point the competition shifted to a single-elimination bracket. All matches were played in a Conquest format with a ban.[1] 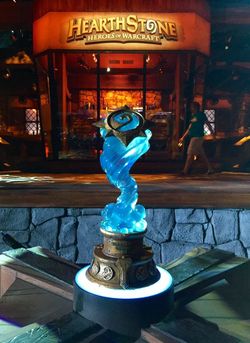 Following the regional playoffs in which players were selected, the Hearthstone World Championship began on November 2-3, and concluded at BlizzCon 2014 on November 7-8. Matches were streamed live on the official Hearthstone Twitch channel. 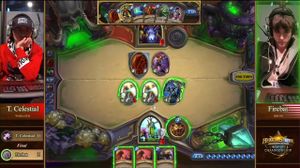 The final moment of the Championship. 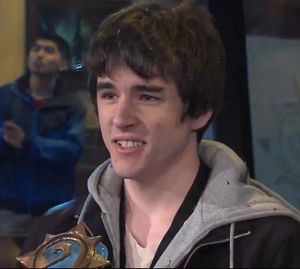 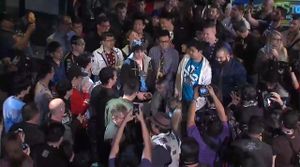 Changes to the Championship[edit | edit source]

Based on feedback from last year’s tournaments, the following changes were implemented for 2016:[4]

While the 2014 Regional Qualifiers saw a maximum of around concurrent 90,000 viewers, the Round of 16 games at Burbank Studio hit a new high point for World Championship (and possibly any Hearthstone tournament) so far, with more than 132,000 concurrent viewers watching the games on November 4th, 2014.[8]

The Championship's final series peaked at more than 135,000 viewers.[9] However, given that it took place at precisely the same time as similar tournaments for both StarCraft II and World of Warcraft, it is possible the figure could have been far higher.

With the ongoing growth of the game and its playerbase, viewer numbers for the 2015 Championship are expected to exceed those of the previous year.