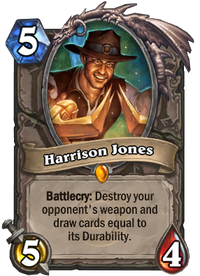 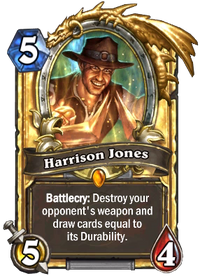 Battlecry: Destroy your opponent's weapon and draw cards equal to its Durability.

“That belongs in the Hall of Explorers!”

Harrison Jones is a legendary neutral minion card, from the Classic set.

The main purpose of Harrison Jones is to counter decks with many weapons. If used correctly he can punish overuse of weapons by your opponent, while giving you a minion as well as a card advantage. Some players may favour using the Acidic Swamp Ooze over Harrison Jones because it is a cheaper card with a similar effect. It is also easier to obtain, and more consistent if you do not run into weapon decks often. Acidic Swamp Ooze may also be better against cards with very high Durability since you are less likely to overdraw. For example, if you play Harrison Jones to destroy a Doomhammer, you are likely going to overdraw unless you have fewer than 2 cards in your hand. However, Harrison Jones provides a far more substantial body than the 3/2 Ooze, usually making him a better option in the late game.

Paladin weapons generally provide the largest card draw for Harrison Jones, as the destruction of Light's Justice (also created by Muster for Battle), Coghammer or Sword of Justice can create significant card advantage. The card also serves well to recoup losses against Tirion Fordring by destroying him before playing Harrison on your turn to destroy the resulting Ashbringer.

Upgrade is also a good target to play Harrison as a counter, whether by punishing the additional Durability on most powerful warrior weapons, or by destroying the 1/3 Heavy Axe created if the warrior had no weapon. Doomhammer is another exceptionally good target, although the player should be careful any overdraw does not result in fatigue or otherwise lead to them exhausting their deck too soon. However, the significant advantage created by destroying this expensive, powerful and often strategically critical weapon can outweigh the disadvantage from any overdraw/premature fatigue.

Harrison Jones can also be combined with cards that grant your opponent a weapon, such as Blingtron 3000, Weapons Project, or Plague of Madness. This allows you to fully benefit from the upsides of those cards without giving your opponent an advantage, while also drawing a number of cards.

Summon
That belongs in a museum!

Harrison Jones is a running gag character found in World of Warcraft. He often lends assistance to adventurers as they seek to unlock the mysteries of Azeroth's antiquity.

Harrison Jones is an archaeologist and explorer, much like his namesake. Jones first appears as a level 70 NPC located inside Zul'Aman. Upon entering Zul'Aman, the inner gate into the city is shut; speaking to Jones will cause him to don his hat (another Indy trademark), shout out and run over to the gong near the door.

Jones is mentioned by Reno Jackson following the defeat of Sun Raider Phaerix - "Haha! I’ve got the rod – if only Harrison could see me now!" His hat can also be found by members of the League of Explorers, in the form of Explorer's Hat. 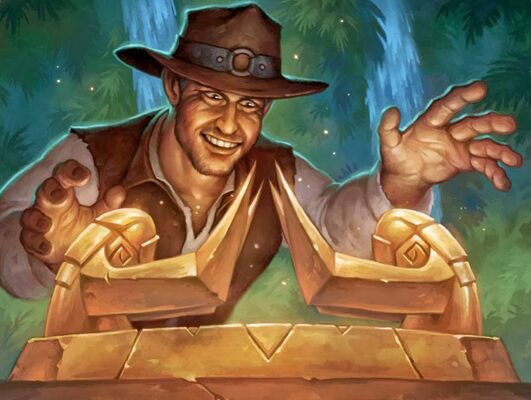