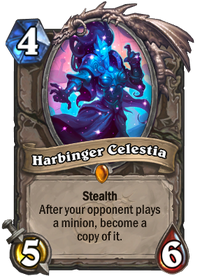 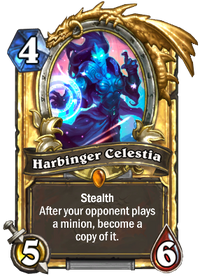 StealthAfter your opponent plays a minon, become a copy of it.

She wanders realities, taking on many forms. One was a unicorn princess.

Harbinger Celestia is a legendary neutral minion card, from The Boomsday Project set.

Harbinger Celestia can be obtained through The Boomsday Project card packs, or through crafting.

While this card has very good stats with Stealth, its card effect much more often than not puts it to waste. She effectively behaves exactly like a Mirror Entity but without the Secret part, which makes it incredibly easy to play around by dropping a weak minion. The only time this card will come to be useful is if your opponent is in topdeck-mode and has no minions or only big ones or against extremely spell-heavy decks like Spell Hunter. However, such a situation is highly unlikely and matchup-specific, and as a result this is a very poor card overall.

While you could theoretically negate its negative effect with Silence, it does not only remove her Stealth, but Silence Priest usually has far better targets to choose from.

Celestia is unique to Hearthstone though she resembles a female Constellar, the mysterious species that Algalon the Observer belongs to who have some role in watching over developing world-souls.