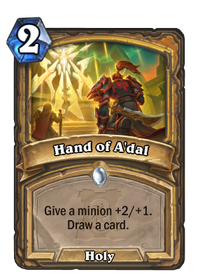 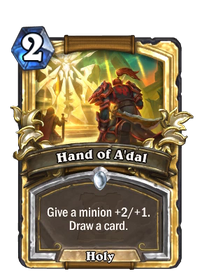 When it meets the Hand of Gul'dan, they're SHAKING.

Hand of A'dal is a common paladin spell card, from the Ashes of Outland set.

Hand of A'dal can be obtained through Ashes of Outland card packs, through crafting, or as an Arena reward.

A strong direct buff with added card draw. Being in Paladin, some great targets are Meanstreet Marshal, Righteous Protector and Immortal Prelate in wild, and can be returned to your hand with Lady Liadrin (minion).

A'dal is the naaru leader of the Sha'tar and rules Shattrath with a gentle demeanor. It shimmers like a chained sun. Unleashed, A'dal's power might destroy cities or topple mountains.

It is a level 73 quest giver located in the central dome of the Terrace of Light next to Khadgar, in the neutral city of Shattrath.

"Hand of A'dal" was a title granted to players who completed the attunement quests for the Battle of Mount Hyjal and the Black Temple during The Burning Crusade. The title was made unobtainable upon the launch of the following expansion, Wrath of the Lich King.

This card depicts a Blood Knight kneeling before A'dal.