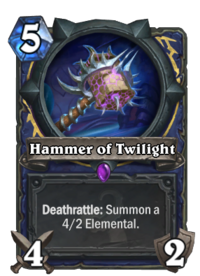 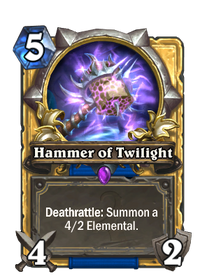 Hammer of Twilight is an epic shaman weapon card, from the Whispers of the Old Gods set.

Hammer of Twilight can be obtained through Whispers of the Old Gods card packs, or through crafting. 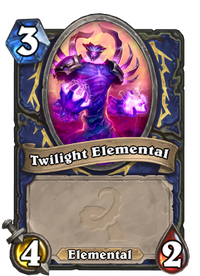 This card offers excellent value and card advantage, providing a 3 mana minion, plus a 4/2 weapon, for just 5 mana. The downsides are the tempo delay on appearance of the Twilight Elemental, and the Elemental's low Health, making it an easy target for smaller minions or weak removal. The Elemental's poor stats for its cost make it a good target for Evolve, helping it to survive long enough to attack with.

The Hammer was forged for Cho'gall by Wildhammer smiths, commissioned by Deathwing and imbued with power of the Old Gods. It is symbolic for the Twilight's Hammer clan. Its creation was a matter of utmost secrecy until Mathias Shaw/Garona, members of the Earthen Ring and adventurers discovered the whole plot. Although the project became jeopardized by their efforts, Cho'gall succeeded in its creation and now wields it within Bastion of Twilight. The heroes who will be brave enough to defeat the mad ogre mage can take it for themselves.