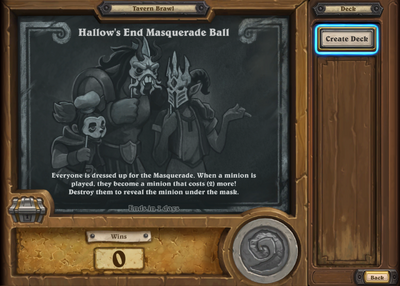 "Everyone is dressed up for the Masquerade. When a minion it is played, they become a minion that costs (2) more! Destroy them to reveal the minion under the mask."

Hallow's End Masquerade Ball is a Tavern Brawl. It debuted on October 7th, 2020.

This Brawl sees players doing battle with their own custom decks of any class. Whenever a minion is played, it will transform into a random minion that costs 2 more. When that minion dies, the actual minion will be revealed.

Minion-based decks are much more powerful than anything else. Minions become both exceptionally Sticky and powerful for their mana cost. Zoolock and Aggro Druid are ideal decks.

Good minions to use include those with strong Battlecries but low stats like Antique Healbot or Animated Broomstick. You can also get exceptional value with minions that generate other minions, like Acornbearer and Fire Fly.