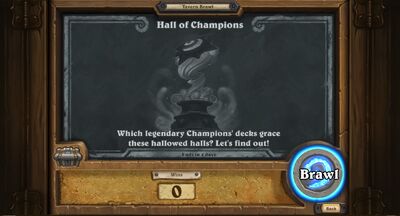 Hall of Champions is a Tavern Brawl. It debuted on January 17, 2018. For exact times, see the schedule.

This Brawl sees players competing with pre-made decks used by the winners of each years' Hearthstone World Championship.

Every time you play this brawl, you are given a deck from a previous hearthstone championship. Along with a piece of information about the deck at the start, it all comes down to whether you know how to play them or not. Each deck is unique and requires some guides. A quick search for the decks in question should give some results. However, remember that you are on a time limit.