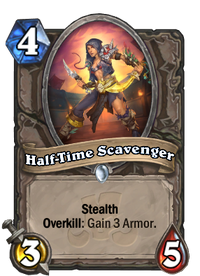 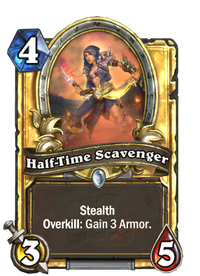 One player's trash is another's “Best In Slot”.

Half-Time Scavenger is a common neutral minion card, from the Rastakhan's Rumble set.

Half-Time Scavenger can be obtained through Rastakhan's Rumble card packs, or through crafting.

This card is a reasonably-statted card with minor upsides. Firstly, stealth lets you control when you want to attack with this minion, almost guaranteeing that you can Overkill with this card at least once. It also lets you Buff this card freely, making it more of a threat when you do decide to attack with it.

Summon
As long as it keeps out arrows.
Attack
It's mine!