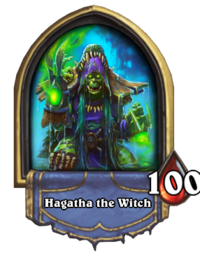 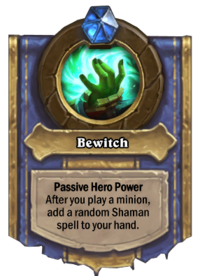 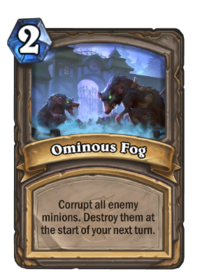 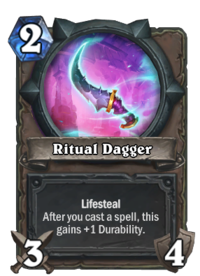 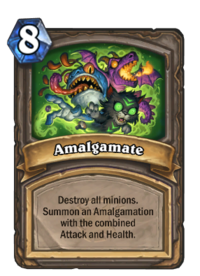 The below classes are listed purely for reference, and have no effect on the boss' use of the cards during the battle. At the start of the game, three hero cards are generated and add to the player's hand.

Hagatha the Witch
This ends tonight. Find me, and witness the horror at the heart of this wood!

Hagatha the Witch
I am the beating heart of these woods.

Houndmaster Shaw
My dogs found her! Hagatha is here!
Hagatha the Witch
I will turn your dogs against their master.

Hagatha the Witch
Yip, yip, yap, yap. And your dogs are irritating, too.

Hagatha the Witch
All creatures of the forest become mine... Once they feel my touch.

Hagatha the Witch
A thousand dark spirits are arrayed against you.
Houndmaster Shaw
I got dogs.

Hagatha the Witch
The curse of the Witchwood claims you.
Houndmaster Shaw
Not without a fight it don't.

Toki, Time-Tinker
Take a break, I'm clocking in!
Hagatha the Witch
You bend your fate, but the trees and stars remember.

Hagatha the Witch
...what just happened?
You press your luck.
The spirits see what you do.
One day your tricks will catch up to you.

Toki, Time-Tinker
I’ve moved heaven and earth to take you out.
Hagatha the Witch
You’re as much an abomination as me, gnome.

Hagatha the Witch
You think your machinations invisible. I see everything.

Toki, Time-Tinker
Your time is almost up, witch.
Hagatha the Witch
The spirits of these woods will preserve me...

Hagatha the Witch
You have no tricks left, gnome.
Toki, Time-Tinker
Time heals all wounds.

Darius Crowley
I've got you in my sights, Hagatha!
Hagatha the Witch
It will be a blessed quiet when I silence that gun.

Hagatha the Witch
What are you compensating for, Crowley?

Hagatha the Witch
A curse on that cannon!
You are loud. Not smart.
Iron rusts just as flesh rots.
Your bark is loud, mutt.

Darius Crowley
This land belongs to the Gilneans.
Hagatha the Witch
You abandoned this land! I reclaimed it!

Hagatha the Witch
You’re an outcast, even among your own.
Darius Crowley
At least I HAVE a people.

Hagatha the Witch
I will never die, so long as these woods live...
Darius Crowley
I’ll blast every tree. I’ll leave these woods a crater.

Hagatha the Witch
I’ll bury you with your cannon, Crowley.

Tess Greymane
Get behind cover, I'll finish this!
Hagatha the Witch
Turn back, "Princess". Tell your father there's no hope.

Hagatha the Witch
Did your parents have any children they loved?

Hagatha the Witch
Nothing will save you.
Keep digging, Princess.
Picking through the trash?
You’ll find no solace in the reeds.

Hagatha the Witch
These woods will claim your city.
Tess Greymane
Gilneas has weathered worse than you, Hagatha.

Tess Greymane
Leave this place, witch!
Hagatha the Witch
This land was DEAD! I brought it to life. It’s MINE.

Tess Greymane
Leave these woods, and I will let you live.
Hagatha the Witch
I AM these woods.

Hagatha the Witch
Your remains will feed this forest.

Hagatha the Witch
My cult will never die.

Hagatha the Witch
Godfrey, the spirits of this wood call you back...

Hagatha the Witch
I am one with these woods, and I will never die.

Genn Greymane
It is done! Already the woods grow quiet and light returns to our city.

Player switches to Hagatha The Witch

Hagatha The Witch
Look upon your reflection, and see the agent of your end.

Hagatha the Witch is unique to Hearthstone. When Hagatha took residence in the Blackwald, she twisted the woods and awakened the trees, spirits, and whatever beasts lurking in the woods to create a twisted, haunted domain. Since then, Gilneans residing near the woods have called the woods by a new name - The Witchwood.[1]

We do not know much about Hagatha’s true nature. Is she indeed the source of the curse, as rumored? Or is she merely another one of its victims? Was she a survivor of some great battle who dragged herself deep into the forest and fell prey to dark magic? A wicked manifestation of the forest’s anger, furious with intruders and despoilers? An unusually skilled shaman, whose ambition and desire for vengeance have outstripped all good sense?

Somewhere, on the bank of a dank and deadly swamp in the depths of the forest, she waits. When she speaks, every malignant thing in the woods bends an ear to listen. When she breathes, coils of glowing mist drift between tangled branches, and restless spirits wake from timeless slumber. When she rages, gnarled trees with jagged grins uproot themselves, and whole hillsides rise to lumber into the night. When she dreams, the people of Gilneas have recurring nightmares of a great serpent that threatens to devour the moon. In her despair, the vile and bizarre Shudderwock stalks the land.

She is terrifying, but she isn’t a mindless force of nature, nor is she all-powerful. She is lucid, cunning, and plotting.

We do not know why she hates this city and its people, nor whether she really even does—Gilneas may be just an obstacle to a larger goal. Whatever Hagatha’s ultimate motive, the curse is already closing its shadowy claws around the city, and she will not stop until it is lost to the Witchwood.[2]

When you start the encounter you will originally be Houndmaster Shaw with 3 custom hero cards representing Toki, Darius and Tess. You will also be prompted to select a passive treasure on your first turn. Each hero card does damage to all minions, grants 5 armor and shuffles more cards into your deck and prompts you to select another treasure. Toki costs 3 mana and does 3 damage, Darius does 5 of each and Tess does 8. You spawn a cannon when swapping to Darius and the cannon is destroyed once you swap away from Darius.

Hagatha has many powerful minions that represent the Witchwood. Try play around common Shaman removal like Lightning Storm, Elemental Destruction, Hex, Crushing Hand and other such cards she will be receiving from her passive hero power.

If you use all the heroes as soon as possible for the extra cards/removal/extra passive then combining the passive Double Time to double your first cast every turn and the Cult of the Wolf passive makes for a very commanding 10th turn. As you can gain an extra Call of the Wild from your hero power as Tess and put 2 copies of every Animal companion on the board at once. If you combine this with the Entrenchment passive for +2 health to all minions and the First-Aid Kit to recover all friendly character health by 2 at the end of each of your turns it simply becomes a matter of surviving until turn 10.

If Hagatha spends her turn removing every minion and not developing anything simply repeat the Hero Power + Call of the Wild combination. If she puts more minions down. Use Tess' hero power to fish up another Call of the Wild for later turns as backup and deal with the board where possible. This may just be the case of trade away every animal companion you have and replaying Call of the Wild. Its a bit of a gamble because of the nature of Tess' hero power but if you can pull it off you can win in a few turns after the situation is stabilized.