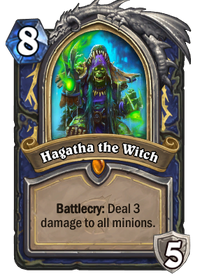 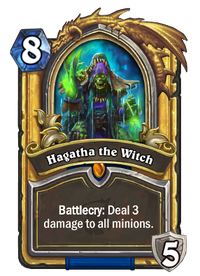 Battlecry: Deal 3 damage to all minions.

Hagatha the Witch is a legendary shaman hero card, from The Witchwood set.

Hagatha the Witch can be obtained through The Witchwood card packs, or through crafting. 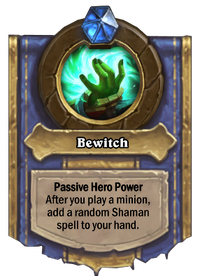 Hagatha's Battlecry is a strong AoE board clear. It does affect your own minions as well, so be careful. The Battlecry can be replicated by Shudderwock for further usage, but once again be careful about the double-edged effect, especially due to the random order of Shudderwock's mimicking.

Hagatha's passive hero power gives up the board presence of the shaman's totems, in return for constant and unpredictable value. Random Shaman spells generally include burst damage and finishers (Bloodlust, Windfury, Lava Burst) or board clears and strong removal (Hex, Lightning Storm, Volcano), among more specialised utility. However, there is also a risk of getting dead spells like Ice Fishing or Totemic Might; in this cases these spells should be played with excess mana. Most of the randomness can be avoided as more minions are played, allowing you to average out for a variety of effects. In longer games, keeping low cost minions until Hagatha is played first can be important.

One of the risks of this card is overdrawing cards thanks to her Hero Power. Playing Hagatha with a hand of several minions can often lead to your hand being flooded, with each minion played requiring a spell afterwards in order to free space. It can get worse with minions or spells that draw or generate additional cards, or being forced to Overload and limit what you can play next turn. Try to play Hagatha only when you have a medium-sized hand or a few spells you can reliably drop.

Summon
Dark spirits, twist the trees, foul the lake, and curse this land!

For the lore of this card, see Hagatha the Witch (Disambiguation).