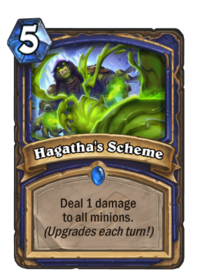 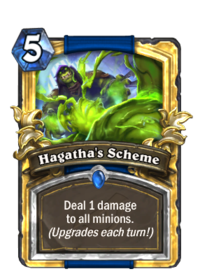 Deal 1 damage to all minion.
(Upgrades each turn!)

Hagatha's Scheme is a rare shaman spell card, from the Rise of Shadows set.

Like all Scheme cards, it's generally a good idea to keep this card in your hand during your opening mulligan so that it can power up as much as possible once you play it. While you may need to play this card at lower power in an emergency, generally speaking you'll want its damage output to at least hit 4-5 damage before it becomes worth its sizeable cost.

Hagatha's Scheme works well with Storm Chaser, which can pull the card from your deck fairly consistently. It also has incredible synergy with Omega Mind thanks to its extreme damage potential.