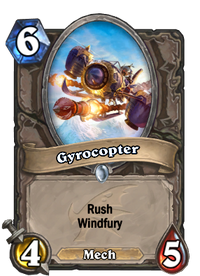 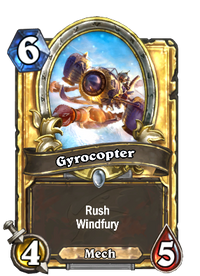 Gyrocopter is a common neutral minion card, from the Descent of Dragons set.

Gyrocopter can be obtained through Descent of Dragons card packs, through crafting, or as an Arena reward.

Gyrocopter is a straight upgrade to Windfury Harpy. It has Rush so it doesn't need to stick around for a turn to have any value and can be used to deal up to 8 damage to minions. It's also a Mech, so it can be buffed by Magnetic minions to make it more powerful or have its cost reduced by Galvanizer.

This card is a good pick in Arena. It can go two-for-one against many other minions, making it an effective removal card. While it's no Twin Tyrant or Walking Fountain, it's also cheaper.

Gyrocopters are an aerial vehicle built by gnomes, dwarves, and goblins. They first appeared in Warcraft III as a Human unit.

The ingenious dwarven engineers, taking a nod from their inventive gnomish cousins, constructed the ultimate airborne scout vehicle. The gyrocopters are small but versatile flying machines that can cover great distances at speed and evade enemy ground forces. Though the contraptions are somewhat rickety, they are armed with mounted cannons and bombs, and piloted by the daring – if not insane – dwarven pilot corps.

During the events of The Frozen Throne, dwarves replaced their gyrocopters with upgraded Flying Machines