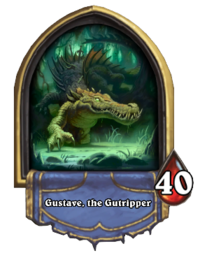 Hagatha's pet eats his way from the bottom of the food chain up.

Gustave, the Gutripper is a boss that can be encountered during the Monster Hunt. 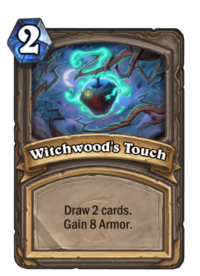 For Darius, you should skip a turn until you have enough mana to play two minions. He can't eat your cannons, so those will be your saving grace.

Your hero power could substitute your minions on the board. However, remember that he can destroy his minions.

You will be forced to wait. Toki is slow and it might be best to let him deal with his own minions. If you need to take board advantage, you can considering playing your high attack minions together with your lowest attack minions, so that the bigger ones are protected from the hero power.

Keep putting minions on the board. The more of a curve you have the better.

Hagatha the Witch
Gustave, my pet, save some for your master.

Gustave is original to Hearthstone.

Gustave is likely named after the real Nile crocodile also called "Gustave". Believed to be the largest living specimen of Nile crocodile at more than 18 feet long, Gustave is said to have killed more than 300 people and has never been caught by humans.

His Hero Power - Cull the Meek - is possibly a reference to Renekton, a champion from the game League of Legends that shares a similar appearance to Gustave.