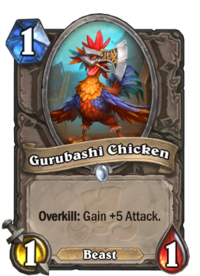 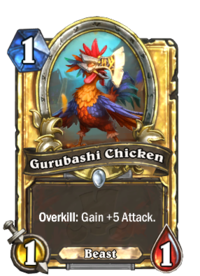 Gurubashi Chicken is a common neutral minion card, from the Rastakhan's Rumble set.

Gurubashi Chicken can be obtained through Rastakhan's Rumble card packs, or through crafting.

Similarly to Angry Chicken, if its Overkill effect triggers, Gurubashi Chicken becomes extremely powerful for its cost. However, this requires a lot of setup, as the Chicken must have its attack buffed in order to overkill a minion and a health buff in order to survive the attack, and it must not be removed on the opponent's turn. This makes its effect much harder to use than Angry Chicken, as the latter only needs to have its health buffed and survive a nominal amount of damage.

Windfury can be helpful, allowing Gurubashi Chicken to use the attack buff right away after killing a minion. Bestial Wrath provides Immune and an attack bonus, making it easier to trigger this card's effect, and The Beast Within can buff the Chicken without spending its attack.

In most cases, the expenditure of effort to get the effect going is not worth the payoff, and Gurubashi Chicken is usually only played for comedic effect.