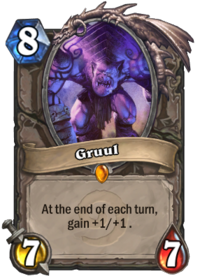 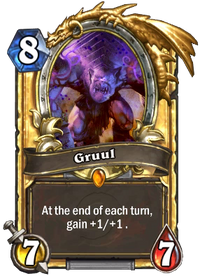 He's Gruul "the Dragonkiller". He just wanted to cuddle them… he never meant to…

Gruul is a legendary neutral minion card, from the Classic set.

Gruul can be obtained through Classic card packs, through crafting, or as an Arena reward. Regular Gruul can also be obtained as a first-time reward for first time reaching Legend in Ranked mode.

Gruul can be a game-ending card if not immediately dealt with. Gruul gains +1/+1 at the end of each turn, both the controlling player's and their opponent's. This can allow Gruul to quickly grow to a staggering size. By the time the opponent is able to attempt to remove him, Gruul will already be an 8/8. If he is not removed, damaged, or silenced, he will be a 9/9 by the time he is no longer exhausted.

Gruul is best included in decks that can protect him. Opponents should make the removal of Gruul an extremely high priority.

With the Grimy Goons' hand-buffing effects, Gruul can become a very big minion very quickly, and it will still increase its stats after each turn.

Gruul the Dragonkiller is the father of the seven gronn lords of the ogres, and the most powerful of them. Although he seems to be nothing but a cruel brute, he possesses intelligence. In the events unfolded in the novel Beyond the Dark Portal — shortly after Deathwing invaded his home — Gruul was met by the lost heroes of the Second War: Khadgar, Turalyon, and Alleria Windrunner. They were after the Skull of Gul'dan which Deathwing possessed. After that, Gruul and his ogre minions, along with the heroes, challenged Deathwing from his perch in Blade's Edge Mountains — killing his eggs and impaling his lesser black drakes on the mountain spikes. Infuriated by this act, Deathwing landed on top of them and attacked Gruul. Although clearly no match for the mad Aspect's power, Gruul was saved by Khadgar's miraculuous spell when he disassembled some of the adamantium plates that were holding Deathwing's unstable body together resulting in Deathwing's retreat. This led to a clear devastation for the black dragonflight in Outland. The results can still be seen as impaled black dragon corpses all over Blade's Edge Mountains.

In Warlords of Draenor[edit | edit source]

In the alternate timeline of Warlords of Draenor, Gruul was instead enslaved by Garrosh Hellscream's Iron Horde, and is used to haul fuel to the furnaces of Blackrock Foundry.

Garrosh knew that the surest path to breaking the gronn lay in subjugating their great father, Gruul. Known in another time as the Dragonkiller, here Gruul has been reduced to the role of menial laborer. In a cruel mockery of the Shattered Hand’s warrior tradition, his hand has been replaced with a hook to enable him to more easily haul pallets of fuel to the furnace.