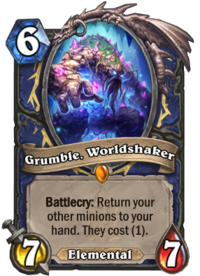 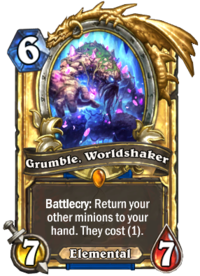 Battlecry: Return your other minions to your hand. They cost (1).

The grumbling grew to a mighty rumbling, and out of the caverns the kobolds came tumbling.

Grumble, Worldshaker is a legendary shaman minion card, from the Kobolds & Catacombs set.

Grumble, Worldshaker can be obtained through Kobolds & Catacombs card packs, or through crafting.

Grumble is a slightly overstatted minion for his cost. While you could play him for stats with no other minions, it's more effective to use his Battlecry to return other expensive Battlecry minions. His effect is hard to time right, but having a second use for powerful Battlecry cards like Kalimos, Primal Lord at a huge discount can be game-swinging. It's best you use him with some mana to spare since ending your turn without other minions in play can kill your tempo.

Grumble can also work well with cards that transform your minions like Evolve and The Storm Bringer; if you get a low-stat, high-power Battlecry minion off of it and it stays on the board, Grumble can return them so you can use their Battlecry for much cheaper.

Grumble, Worldshaker is unique to Hearthstone. He is a giant earth elemental born from the ambient magic soaking into the walls of the catacombs. He wakes every few millennia, sending terror and tremors throughout the kobold empire.[2]