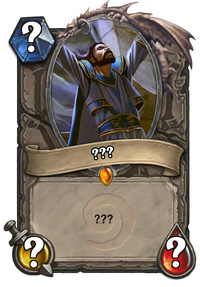 Your other minions can't be targeted by enemy spells or Hero Powers.

Grounding Totem was a shaman minion card. It was removed from the game in alpha and replaced by Unbound Elemental, and is no longer obtainable.

According to Ben Brode, the developers tried "a lot of directions" for the card before removing it.[1] The card text shown is from some time in early 2013, shortly before its removal.

While at least one version of the card's text is known, its cost and stats are not. Its rarity is speculated to have been common, since cards are normally replaced with others of the same rarity. Given its history, it is assumed to have been collectible.

One of the first examples of the "Elusive" ability, to date this is by far the most powerful instance of the effect, and one of the few to grant the effect to other minions. Notably the text appears to either be in error (specifying only enemy spells and Hero Powers), or represent an earlier version of the ability.