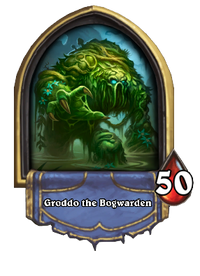 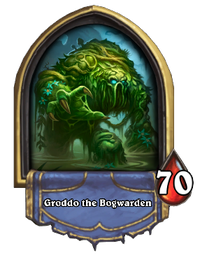 Dead emerge from the swamp. It's not a pleasant scent.

Groddo the Bogwarden is a boss that can be encountered during the Monster Hunt. 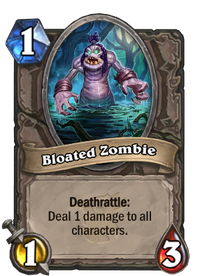 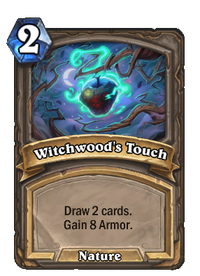 If you bring him down to lower health than you, you can use his zombies against him. Sadly, your Cannons will usually not be able to do much, but if you can increase its damage such as with Extra Powder, you can 1-shot Zombies. You can also use board clears to control. One problem with Crowley is that his Rush minions usually die on the turn they are spawned, causing a Bloated Zombie to be raised.

If you have cards with Charge or Companionship, you can control when his minions die and this will allow you to win the match. However, the Hero Power is very problematic as the 1 health Bloodhound is likely to die quickly; in fact, you'll probably send it to suicide.

Toki is a bit more tricky than the other and will require you to use your hero power to get the results needed from random effect. It is recommended that you play it safe and slow with this hero. Make sure to regularly clear his board, else the minions will be too much to handle.

This fight can be challenging other than the obvious of keeping his minions from dying together. The best way to win this fight is to use Deathrattle minions to always keep the board on your side. Alternatively, Jade Shuriken can help to eventually build a board so big that Groddo can't clear it in one turn (Cult of the Wolf and Sticky Fingers passive abilities together allow to hoard multiple Shurikens for a huge swing turn).

Hagatha the Witch
My precious Bogwarden... When I was left for dead, he stood over me.

Groddo the Bogwarden
This is MY bog! Only the dead live here.

Groddo the Bogwarden
I am never alone.
The bog holds secrets.
Look what's come up.

Groddo the Bogwarden
First they float, and then they bloat...

When Hagatha was left for dead, Groddo brought her back to health and now serves her.