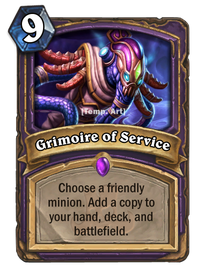 Choose a friendly minion. Add a copy to your hand, deck, and battlefield.

Grimoire of Service was an epic warlock spell card originally planned to appear in Rastakhan's Rumble but which was cut prior to release due to being deemed too powerful when used in combination with Voidlord. It was eventually replaced by Void Contract.[1]

Grimoire of Service is a warlock talent in World of Warcraft that temporarily summons a second demon minion to fight for the warlock alongside their regular, permanent demon minion for 25 seconds. The second demon deals 100% increased damage and, upon being summoned, immediately uses one of its special abilities, which varies based on which demon is summoned.