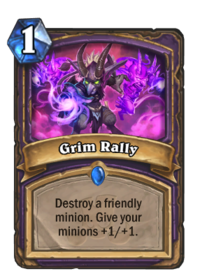 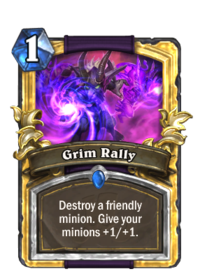 Destroy a friendly minion. Give your minions +1/+1.

Grim Rally is a rare warlock spell card, from the Rastakhan's Rumble set.

Grim Rally can be considered to be a more aggressive version of Dark Pact, mainly serving Zoolock, and sometimes Cubelock. Grim Rally is best used on an egg, such as Scarab Egg or Nerubian Egg. Cubelock can also use Grim Rally to destroy a friendly Carnivirous Cube. In cases where Deathrattle minions aren't readily available, the sacrifice of any small minion is still beneficial to securing a medium-sized board.