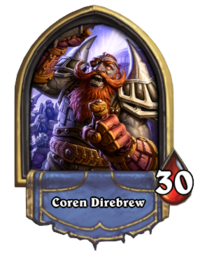 Before you can crush Ragnaros, you'll need to defeat these unruly dwarves.

Grim Guzzler is a boss encounter found in the Blackrock Mountain adventure. It is the first encounter of the adventure's first wing, Blackrock Depths.

Coren Direbrew is the enemy hero for the encounter. 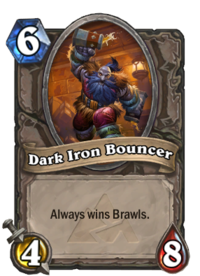 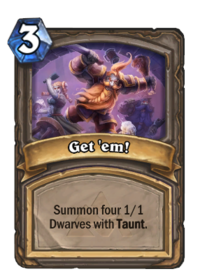 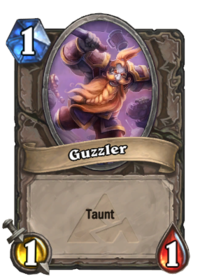 Defeating Coren is a relatively straightforward challenge. Create a deck filled with powerful minions, as expensive as you like; Coren's Hero Power Pile On! will pull them onto the board for you each turn at no cost, and they will be able to attack before his minions due to the order of play. This will allow the player to win easily, with Coren's minions unable to compare to the player's.

For the most part, you will rely on these automatically summoned minions to win the game. This means that you will be unable to play minions from the hand for the first few turns, but this can be countered by including some spells in your deck, preferably removal. Note that Battlecries will therefore be of no effect unless you play the minion from the hand.

Alternatively, build a deck with spells. Coren's Hero Power will only draw minions from your deck. The only minions that are worth adding are the strong tough ones, but pretty much it is an easy win for a Legendary deck. You can also try cards that gain buffs for or give buffs to other minions, such as Stormwind Champion. However, do NOT use paladin or shaman because you do not want your Hero Power blocking the beneficial half of Coren's Hero Power. 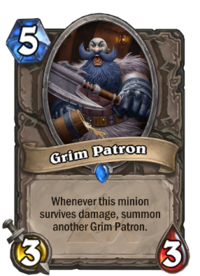 Nefarian
The Dark Iron Dwarves are enslaved by Ragnaros. Fight through them to reach the Firelord!

Coren Direbrew
Everyone! Haha. Lookee now. We've got a "guest".

Ohoho! Now you're in trouble. Phalanx! Get 'em!

Coren Direbrew
Whoa! What's ha...? I don't like it, but it's happening anyway!
Nefarian
The Grim Guzzler. How droll.

Coren originally said the following whenever he summoned a Succubus, in reference to Mistress Nagmara, a succubus barmaid at the Grim Guzzler in World of Warcraft:

Mistress Nagmara. I think our "friend" would like a "drink".

As Succubus was renamed to Felstalker in patch 14.6.0.31761, Coren no longer says anything upon summoning the card. 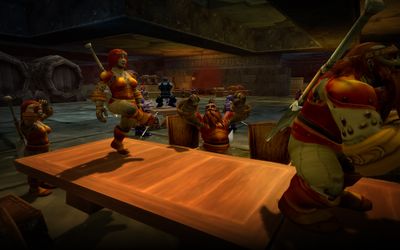 The Grim Guzzler in World of Warcraft

The Grim Guzzler is home to all sorts of eccentric characters, and Coren Direbrew is no exception. He and his totally reasonable and not rambunctious friends will require you to throw down if you want to journey deeper into the Mountain! Besting Coren and his raucous band of dwarves will reward you with two copies of the Grim Patron minion.[4]

Deep under Blackrock Mountain, near smoldering rivers of slowly flowing lava, lies the cavernous sprawl of Blackrock Depths. Home to the fire-resistant Dark Iron Dwarves and their host of stone-hewn golems and blazing elementals, these hearty folk have carved out an empire for themselves from the mountain itself, ultimately aiming to claim all of Blackrock for themselves.

Whether they’re tending to the piping hot forges or enjoying a good old-fashioned tavern brawl at the Grim Guzzler, the denizens of Blackrock Depths are a force to be reckoned with. Tempered in the heat of the mountain, the Dark Iron Dwarves will stop at nothing to destroy those who control the upper reaches of the mountains, namely those accursed dragons!

Strong, stubborn, and stalwart, the heat of Blackrock Depths has forged the Dark Iron Dwarves into singe-proof juggernauts. Able to take an immense amount of punishment, many of the minions that inhabit Blackrock Depths can both dish out their fair share of pain, or turn inflicted damage into impressive beneficial effects.

Since a high heat (and alcohol) tolerance is a sign of strength in Dark Iron Dwarf society, you can rest assured that their tavern brawls within Blackrock Depths’s Grim Guzzler tavern are an impressive sight to see. If you decide to throw the first punch, prepare yourself as a few grim patrons (and all of their friends) join in on the action!

If you manage to take the heat and survive a few drinks at the Grim Guzzler, make sure you stroll steadily along the stone paths that connect the city. Those paths are all that separate you from a dip in a molten volcanic river! Shamans can harness the essence of lava in order to melt away their Overload problems. How refreshing![5] 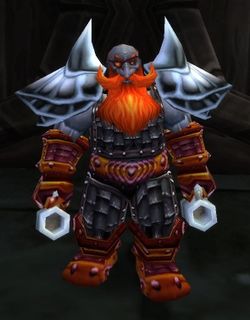 Coren Direbrew in World of Warcraft

Coren Direbrew is a Dark Iron dwarf infamous for attacking the denizens of Azeroth during the ale-swilling festival Brewfest. Sending his Dark Iron troops to the surface in mole machines, it's never long before adventurers form a party to tackle Coren head-on, and take the fight to him in his lair in Blackrock Depths. Found in a side-room off the Grim Guzzler, Coren drops a variety of Brewfest-themed loot when defeated, spurring players to tackle him year after year in search of elusive rewards.

Coren's motive for ruining the drunken festivities is the humiliation he received at the first ever Brewfest, which was a competition between the pandaren monk Chen Stormstout and the Bronzebeard dwarven brewmaster Grimbooze Thunderbrew. Coren wanted to participate as well, and, after Coren annoyed him enough, Grimbooze agreed. However, Coren only received two votes for his beer - one from himself and the other from Chen, who did so out of pity. Coren became upset and punched Grimbooze across the face. He then tried to hit Chen, but Chen, being one of the greatest monks on Azeroth, quickly dodged his punches and countered with a massive uppercut, sending Coren flying into a crate of his own beer. Coren decided to quit the competition and headed back to Blackrock Mountain in fury. To this day, it is unwise to criticize his brew, as anyone who does so will be punished severely. One of the more recent people to try it was fed to a pack of dire boars.

The Grim Guzzler is located deep inside Blackrock Depths. It is part of Shadowforge City, and lies just beyond the Manufactory and before the Chamber of Enchantment.

The tavern is a large two-level area filled with mostly inebriated patrons. These patrons should remain neutral to adventurers unless they are aggravated.

Until recently, drunken brawls raged within the Grim Guzzler on an almost daily basis. Barkeep Plugger Spazzring has reduced the frequency of these scuffles with Phalanx, a mighty golem bouncer programmed to maintain order in the tavern and eliminate raucous patrons with extreme force. 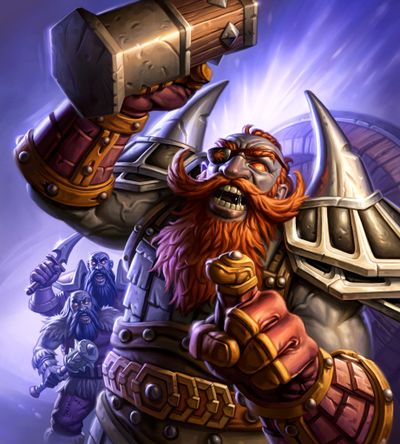