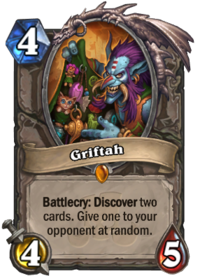 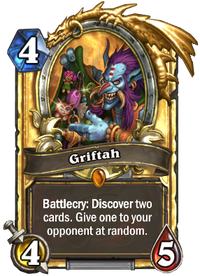 Battlecry: Discover two cards. Give one to your opponent at random.

With Griftah in your deck, sometimes you start the game with The Coin!

Griftah is a legendary neutral minion card, from the Rastakhan's Rumble set.

Griftah can be obtained through Rastakhan's Rumble card packs, or through crafting.

Griftah allows you to generate a card for both yourself and your opponent. The extremely unreliable effect, which is effectively equal between you and your opponent, has two clear advantages: You are able to play the card you receive from Griftah on the same turn as you earn it; and you know the card your opponent has received.

Griftah's ability is extremely situational and valuable in only a handful of niche cases. As you have such little control over him, it is challenging to find a suitable opportunity to play him to gain advantage over your opponent. Here are some ways in which Griftah can deliver a clear advantage, based simply on giving a purely random card to each player:

Summon
There's a customer born every minute!
Attack
Trust me!

Griftah is a phony amulet vendor located in the Lower City of Shattrath along with other appearances at Darkmoon Island and Kun-Lai Summit.

He persistently announces his silly wares, such as Soap on a Rope and other white neck slot items, all of which are quite useless, either granting abilities you already have (such as jumping, swimming, or returning to your body upon death) or effects you do not need (such as protection from critters or from "Tikbalangs", which aren't actually in the game).