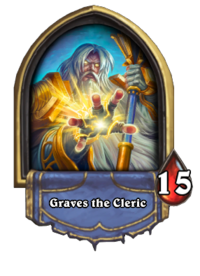 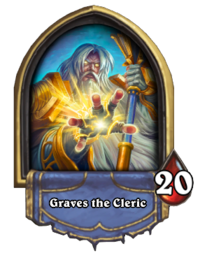 This healing adventurer was separated from his old party.

Graves the Cleric is a boss that can be encountered during the Dungeon Run.

This section is outdated; Graves no longer has Northsire Clerics in his deck.

Graves' modus operandi is to draw cards, particularly with his minions. His chief method of doing so is to set up his Northshire Clerics and use his hero power on multiple minions. An effective strategy against him, if the player can comfortably survive long enough, is to allow him to do this, assisting if possible, until he dies of fatigue. He will not slow down drawing as he nears the end of his deck, and he will continue to draw once his deck is depleted. He will also not hesitate from drawing once his hand is full, allowing excess cards to be 'milled'.

The other option is to, like most other early bosses, play aggressively. Graves has very little in the way of Taunt, and his Hero Power can't heal himself. A relentless direct assault will cause him to go down quickly. This is often the preferred method, as his deck will be much larger than yours and thus he won't start fatiguing before you do.

Graves the Cleric
Halt! I claim these treasures for the Light!

Graves the Cleric
Begging for my mercy won't save you.

Graves the Cleric
Believe!
Glorious!
The Light grants mercy!
Turn from the darkness!
You're healed!

Graves the Cleric
It was meant to be...

Graves the Cleric
I claim these treasures for the Light! And for me.

Graves the Cleric is unique to Hearthstone. Judging by his attire of white and gold, he appears to be a member of the Brotherhood of Northshire.

Clerics can be found all over Azeroth, their spiritual leadership keeps both the people and the troops of Azeroth focused upon their mission of everlasting peace. Clerics ability to channel the spirit of humanity through their bodies makes them truly wondrous, and stories of their ability to heal the sick and injured, as well as being able to affect the perceptions of others, are miraculous in nature. The transgressions against humanity by the orcs have forced them to devise ways to defend themselves, but their true path remains the healing of men's souls.

The Brotherhood of Northshire is a clerical order, comprised of clerics, priests and paladins based in Northshire Abbey.