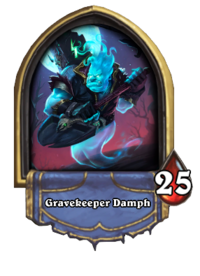 The rattle of bones remain a comfort to him.

Gravekeeper Damph is a boss that can be encountered during the Monster Hunt.

Don't let him fill the board. Use your minions and cannons to defeat them.

Create a beast synergy to empty the board. One deathrattle is what you should always aim for.

Meet his minions with his own. Trade whenever you can.

Make sure you can keep up by dealing with his minions first and him secondary.

Gravekeeper Damph
You shouldn't be out so late.

A shallow grave for that one.
Climb in. Find rest.
The dead have tales to tell.
The rattle of bones.
We're not so different.

How I've missed the ringing of bells.

Gravekeeper Damph is original to Hearthstone.

Damph is likely named after Dampé, a gravedigger who appears as a recurring character in the Legend of Zelda video game franchise.