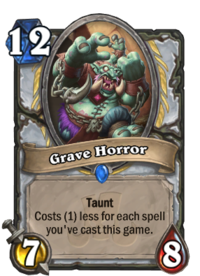 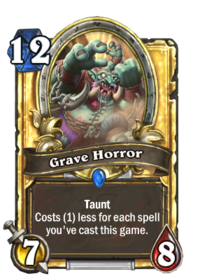 Taunt
Costs (1) less for each spell you've cast this game.

Trolls can regenerate lost limbs, but this is what they do with the leftovers.

Grave Horror is a rare priest minion card, from the Rastakhan's Rumble set.

Grave Horror can be obtained through Rastakhan's Rumble card packs, or through crafting.

Grave Horror is comparable to Arcane Giant, but trading 1 Attack for Taunt, albeit being a Priest card. While Priests are not as effective at cycling spells as Rogues or Druids, it still serves well as a value-oriented defensive minion for control decks that run a moderate amount of spells.

This creature appears to be an undead dire troll.

This particular creature also bears a resemblance to abominations, and may thus represent an abomination partially made with dire troll parts. The concept of an abomination fused with a troll is unique to Hearthstone.