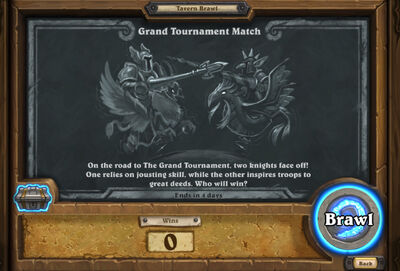 "On the road to The Grand Tournament, two knights face off! One relies on jousting skill, while the other inspires troops to great deeds. Who will win?"

Grand Tournament Match is a Tavern Brawl. It debuted on August 19, 2015. For exact times, see the schedule.

Heralding the coming release of The Grand Tournament, this Brawl was designed to showcase its two new mechanics - Inspire and Joust - and allowed players access to cards from the expansion before they were otherwise available.

The Grand Tournament Match sees players doing battle as two opposing heroes: Medivh and Alleria. Upon queuing, players will be randomly cast in one of these roles, with access to a special pre-made deck.

The match is introduced by none other than Tirion Fordring