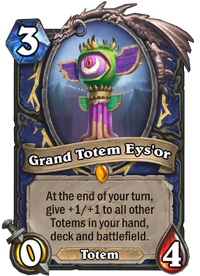 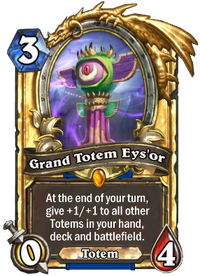 At the end of your turn, give +1/+1 to all other Totems in your hand, deck and battlefield.

Some say it can see straight into the soul of any who dare to read its flavor text...

Grand Totem Eys'or is a legendary shaman minion card, from the Madness at the Darkmoon Faire set.

Grand Totem Eys'or can be obtained through Madness at the Darkmoon Faire card packs, through crafting, or as an Arena reward.

For a Legendary Totem, it is a real eyesore. Jokes aside, one shouldn't underestimate the constant +1/+1 buff on other Totems that Eys'or provides. Totemic Reflection and Splitting Axe are the cards to really watch out for, as they effectively help stack these buff effects. Without any mass removal (eg. Brawl, Twisting Nether, Plague of Death, etc.) , this effect can spiral out of control the longer you leave Eys'or active in the battlefield. Silence effects are also an effective method to deal with other buffed totems or Eys'or itself, as the majority of totem minions have little/no base Attack. (eg. Silence (card), Mass Dispel, Showstopper, etc.)