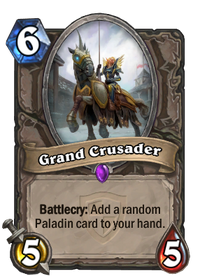 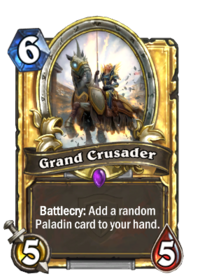 Battlecry: Add a random Paladin card to your hand.

A veteran of a number of crusades, she is a force for light and goodness. Her latest crusade is against goblin telemarketers.

Grand Crusader is an epic neutral minion card, from the Grand Tournament set.

Grand Crusader can be obtained through The Grand Tournament card packs, or through crafting.

The presence of this card increases the value of learning the range of possible paladin Secrets.

Grand Crusader has a good Battlecry, but she has low stats for her cost, so, she serves more as a filler card, since she is a 5/5 card that gives a random Paladin Card.

Since Grand Crusader is only playable in wild, only the Wild format Paladin cards are relevant. For the full listing, see here.

Summon
Answer the call of the Light.
Attack
For the Light!

Sometimes, a mere crusader just isn’t enough. For those times, choose a Grand Crusader instead. Not only does it slice, dice, and gleam with holy light, this shining paragon of knighthood packs a potent Paladin punch![1]